When The Dark Knight Rises hits the big screen, it will surely be one of the biggest and most spectacular movies of the year and probably even the past decade. Boasting a killer cast with Christian Bale back in the bat suit, an awesome story line to end the trilogy, Anne Hathaway looking sexy as Catwomen, and a monstrous and intimidating villain who will send fear through the streets of Gotham. 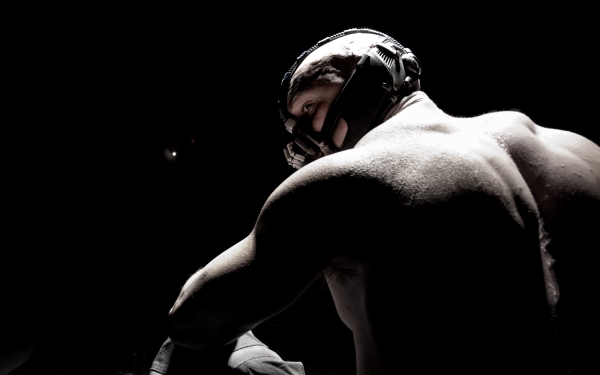 The ripped results of the Tom Hardy workout!

What isn’t there to be excited about?

As with all movies of this magnitude, people are devouring any information they can get their hands on. From obsessing over the latest trailers, searching for interviews from the stars, and asking a barrage of questions such as, “Does Batman die?” And, “Is this really the last Batman movie?”

There is also another question that many people are asking, “What is the Tom Hardy Bane workout that allowed him to get ripped and shredded to play the role of this epic super villain?” If this question is on your mind and you want the truth behind the Bane workout, then you’ve come to the right place! It’s time to kick the lies and rumors to the curb and discover how Tom Hardy trains, his mindset, what supplements he takes and his diet and nutritional program.

Click Here To Upgrade Your Body To Bane Status!

It would go without saying that Tom Hardy trained damn hard to become the monster that is Bane. Being a natural skinny guy (an ecotomorph body type), Tom Hardy has definitely done an impressive job sculpting of his body. This became clear with the transformation he made in the MMA movie, Warrior. If you saw pictures of him before and after, it’s obvious that he trained like a true “warrior”.

While filming Warrior, Tom was sculpted, lean, and kept his body percentage to low single digits. As Bane, the focus was on bulking up and adding additional weight to become “larger than life”. One look at his physique and your jaw drops. The ridiculously big traps, the bowling ball shoulders, the arms that look like they could punch through steel, and the chest carved from stone. 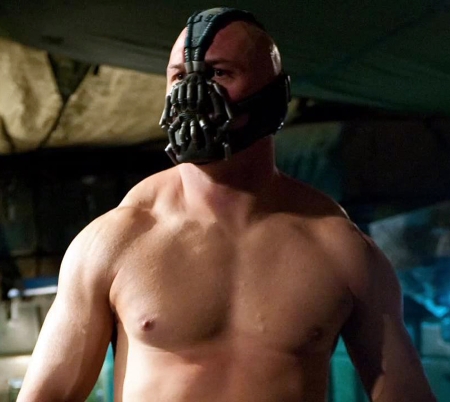 In fact, during interviews Tom explains that he only had three months to prepare and fit the role of Bane. This meant that he had to pack on 30 pounds (roughly 13 kg) in this time period. That in and of itself is very impressive.

The Bane Mindset Of Muscle Carnage

For actors who have limited time to get into a role, messing around is no option. You have to be serious and dedicated. Motivation has to be sky high, training must be focused and intensity levels have to be at cranking at 100%. Mindset is everything when it comes to training, especially when you have a deadline. This is one of the big secrets to the transformation of actors. Training to a deadline!

While many people like the “idea” of getting ripped, how often does somebody say, “Okay, on such and such date, I must gain X amount of pounds” and then they actually design their training program, nutrition, and supplementation to achieve this goal? And more importantly, actually stick to what they know they need to do.

Most guys go to the gym, throw some weights around and act like an amateur instead of a professional. If you want to bulk up and get ripped fast, then you’re going to have to stop acting like an amateur and become a true professional in all the areas that will contribute to your gains. You have to make gaining muscle a “must” not a “maybe” or a “should”. Set a deadline, work out a plan and then stick to it. 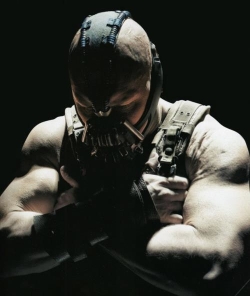 Tom Hardy as Bane is a scary sight.

So what’s Tom eating to help support muscle growth to allow him to develop blockbuster muscles for a blockbuster movie? In Warrior, Tom was on a strict diet that was almost entirely protein and very little carbs. This type of diet approach is very effective if you want to keep body fat percentage low so that muscles become more pronounced, allowing muscle groups such as the six pack to stand out. This diet is damn hard to follow long term and requires a huge amount of discipline.

As Bane, diet is obviously still important but the emphasis is more on bulking up rather than being cut, so the diet, while still heavily shifted towards protein, also included more carbs and lots of fats. This diet is easier to maintain, rather than the “Warrior diet”. In fact, you can get away with eating most things on this bulking type of diet. It’s common to see bodybuilders during a bulking phase who eat pizza, ice cream, and baked goods.

But this is not something you want to do long term, otherwise you will start to gain too much fat and your physique will not look as impressive (not to mention that it’s not the healthiest of diets). So although you will look bigger on this type of diet, it’s not necessarily the “bigger” that you’re looking for. So mix up bulking phases (Bane workout) with cutting phases (Warrior workout).

Tom as expected used protein powder as a supplement but not much else has been reported yet about his supplement stack:

[quote]We’d have breakfast before we got there (gym). Peanut butter on toast. Then we got in the joint, had our protein shakes and a gallon of water…[/quote] 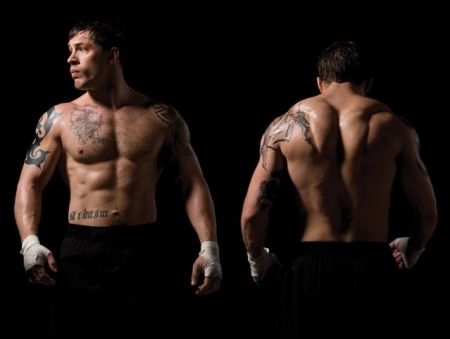 Although Tom has never revealed his Bane workout training methods, by analyzing his physique and knowing about his past training methods that he has been open about, it’s possible to devise a Tom Hardy/Bane/Warrior workout plan.

If you want to look the way Tom looked in the movie Warrior, his trainer who is a former U.S. Marine known as Patrick “P-Nut” Monroe has revealed a few of the training methods he used to get Tom ripped for Warrior. Basically, he had Tom working out four times per day at a lower intensity. This is what Monroe revealed about his theory behind this:

“Throughout the day you need to send constant signals to your body, so that it adapts in the direction you point it in. It’s better to do 10 press-ups every hour than 100 in a single burst. If you do things often enough, your body adapts for the task you set it, and you evolve.”

This method is pretty much impossible for most regular people to do. If you have a “work from home” type of job, then you might be able to pull this off but for most, it’s just not achievable. You can actually do this on a small and slightly different scale by using an interesting technique I learned from celebrity trainer Chad Waterbury, it’s called High Frequency Training and it’s a unique way to pack on muscle mass on any of your weak and lagging body parts. This is very powerful stuff and it’s a technique I continue to use everyday to transform my weak body parts (don’t by shy…everybody has them). You can check out Chad’s HFT program by clicking on this LINK.

What you basically do is choose one exercise for a lagging body part such as push-ups for your pecs, handstand push-ups for your shoulders, pull-ups for your back or dips for your triceps. Note: it’s more practical choosing bodyweight exercises. Then perform this exercise for one set to failure. Repeat this once in the morning and again at night. You can do this technique for up to 30 days before having a few days break before repeating it again on that same body part or choose another.

Tip: Because of the low volume and long breaks between exercising, this method can be used alongside your normal training.

For more information on the actual Tom Hardy Warrior workout, check out the video below to get a great idea of the type of training P-Nut had Tom doing:

This workout sounds very similar to the Tactfit Commando program, which was also created by an ex-marine. So if you want to get cut, ripped, and develop functional muscle, then I would definitely check out this program. I have used this system and it’s definitely powerful and something you might want to mix into your muscle building plan. Another great option is Adonis Golden Ratio (This is an amazingly comprehensive mass building system created by John Barban).

Okay, so you want to develop an intimidating size and the muscles of a diabolic villain, then the best way to do this is with the classic 5 x 5 bodybuilding workout routine. The focus is on compound lifts (bench press, deadlifts, squats, barbell rows, and so on) which are each performed for 5 sets of 5 reps. Here is a video demonstrating the 5 x 5 workout:

Now, full disclosure, Tom Hardy has not yet revealed his workout and anybody who says they know what it is, is lying. So this is not a workout Tom has said that he does but judging by the type of frame he has developed, this type of workout routine will help you achieve a similar physique.

Now that you’ve learned the Tom Hardy Bane workout to develop into a monstrous villain of muscle, take action on what you’ve learned. You have two choices, you could transform your body using the Warrior workout for the lean and cut MMA body. You can also transform into Bane by doing the classic 5 x 5 muscle building routine. Whatever the case, dedicate yourself 100% and you will be blown away by what the mirror reflects back your way in a few months time. Oh and enjoy Batman The Dark Knight Rises. I will leave you with a video of my favorite trailer…